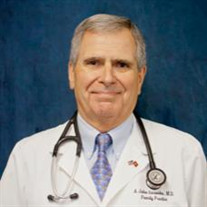 A. John Saranko, M.D., 76, of Plant City Florida, born on February 20, 1945 in Tampa, entered into eternal rest on June 13, 2021. He was known as “Johnny” when he graduated from Pinecrest School in 1962. He was honorably discharged from the United States Marine Corps with the rank of Sergeant, and as he always said: “Once a Marine, Always a Marine.” In 1967, he married the love of his life Pat of South Carolina, and later graduated from Clemson University in 1971. In 1977, he earned his M.D. from the Medical University of South Carolina in Charleston. He completed a residency in Family Practice at Halifax Hospital in Daytona Beach, serving as Chief Resident during his final year. After many years away, Dr. John wanted to build his practice and raise his family in his hometown. He returned to Plant City in 1980 and established a solo medical practice. In 1998, he and Dr. Gregg Gutowski established the Family Practice Center of Plant City, where he cared for patients until his retirement in 2018. Not only was he a compassionate physician, he served in many volunteer positions in Plant City and state-wide. From volunteering as team doc for local high schools to serving in many leadership positions at South Florida Baptist Hospital, his dedication to improving healthcare in his community was always at the forefront. He was an active member with the Florida Academy of Family Physicians, where he served as President and was honored as the Florida Family Physician of the Year. He was a long time member of Welcome Baptist Church and knew Christ as his Lord and Savior. Being raised on the farm, he remained true to his roots. Some of his passions were his orange grove, raising cattle, and gardening. He was passionate about cycling, on and off-road. He loved riding the back-country roads with his biking buddies as well as participating in organized rides throughout the Southeast. As a flatlander, his proudest accomplishment was completing the grueling Assault on Mt. Mitchell event at the age of 74. Above all else, he loved his family and always made his wife and children a priority, generously pouring his time and love into their care. In his later years he dedicated a great deal of love and attention to his grandchildren, who knew him as Papa. He is survived by his wife of 54 years, Pat; children, Chris (Tammi) of Roswell, Georgia, and Kim Whitaker (Andy) of Nashville, Tennessee; grandchildren, Lindsy, Samuel, Suzi, AJ, and Graham; siblings, James Saranko, Kathleen Adkins, and Joe Saranko (Sue). John was preceded in death by his parents, Andy and Juanita Saranko. A funeral service will be held Friday, June 25 at 4:00 P.M. at Welcome Baptist Church, 11308 Welcome Church Street, Lithia, where the family will receive friends beginning at 3:00 P.M. He will lay in rest at Florida National Cemetery, Bushnell. In lieu of flowers, memorial contributions may be made to the Juvenile Diabetes Research Fund at www.jdrf.org/donate and/or the American Diabetes Association at diabetes.org. Expressions of condolence at www.HopewellFuneral.com.

The family of Dr. A. John Saranko, M.D. created this Life Tributes page to make it easy to share your memories.

Send flowers to the Saranko, family.