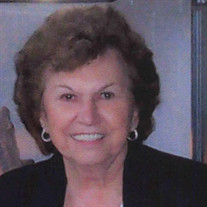 Beverly Mae Block Naset was born in Watertown, Wisconsin on March 5, 1929. She was crowned prom queen along side her high school sweetheart, Bill, who was crowned prom king. They married in 1950 and eventually made Plant City their home in 1957. She worked side by side with her husband Bill running and eventually owning a hometown favorite, Maryland Fried Chicken. Outside of countless hours running the restaurant, she was also very active for many years in Beta Sigma Phi, and was a member of the Presbyterian Church, former member of the Ladies of the Elks and Alzheimers Association. Along with laughter and having fun with family and friends, she loved being outside, working in the yard, sitting on the beach, taking drives with Bill, and enjoying visits and outings with their grandchildren. She was preceded in death by her husband of 56 years in 2015 and joined him in Heaven on his birthday, January 4, 2021. Beverly is survived by her sons, Craig Naset (Teri) of Moreno Valley, CA, and Mark Naset (Brenda) of Plant City; daughters, Kim McElveen (Scott) of Plant City arid Tavia Cowell (Doug) of Dover; grandchildren, Christi Raschke (Scott) of Valrico, Steven Naset of Moreno Valley, CA, Troy Cowell of Pinellas Park, Kevin Naset (Cassie) of Rio Dell, CA, Travis Naset of San Jose, CA, Skoti Sousa (Michael) of Charlotte, NC, Alexa McElveen of Orlando, and Karlie Cowell of Tampa; great grandchildren, Natalie Raschke of Tampa, Jake Raschke of Valrico, Avery Naset of Rio Dell, CA, Olive Naset of Rio Dell, CA, Troy Cowell Jr of Pinellas Park, and Riley Cowell of Pinellas Park. A private graveside service was held for family. Interment at Hopewell Memorial Gardens, Plant City. Memorial contributions may be made to the USF Health Byrd Alzheimers Center and Research Institute at health.usf.edu/giving, South Florida Baptist Hospital Foundation atsfbhfoundation.org, or Southeastern Guide Dogs at guidedogs.org. Expressions of condolence at HopewellFuneral.com.

Beverly Mae Block Naset was born in Watertown, Wisconsin on March 5, 1929. She was crowned prom queen along side her high school sweetheart, Bill, who was crowned prom king. They married in 1950 and eventually made Plant City their home in 1957.... View Obituary & Service Information

The family of Mrs. Beverly Mae Block Naset created this Life Tributes page to make it easy to share your memories.

Send flowers to the Naset family.