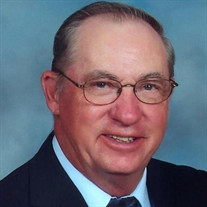 Charles (Larry) or (Chuck) Paisley of Mt. Pleasant, MI passed away Saturday December 19, 2020 in Plant City, Florida at the age of 76, after battling a long illness. Born in Mt. Pleasant on February 2, 1944 to the late Charles and Margaret (Hunter) Paisley. He was a Veteran of the United States Army, having served during the Vietnam War, before marrying Shirley (Brocieus) Paisley. Chuck and Shirley raised their family in the Lansing area, where Chuck first worked for the State of Michigan before serving the remainder of his career as a Lansing Township Firefighter. He was an avid golfer and bowler, a collector of “things”, a country music lover, and a jeopardy fan. Chuck was always willing to lend a helping hand to anyone who needed it. After Chuck and Shirley were both retired, they turned into “snow birds” and would travel to their Florida community where they have several close friends. Chuck and Shirley attended several Busch Gardens concerts, trips with friends, and enjoyed receiving their friends and family from Michigan. Surviving Chuck is his wife of 52 years, Shirley; Their children Chris Paisley, Jim (Jada) Paisley; grandchildren Cassandra(Paisley) and Ryan Bushon, Alec Paisley, Shawna Paisley, Brandon Paisley, Jacob Paisley and Mallory Paisley; great grandchildren Kristopher Spencer, Timmoree and Xaviera Paisley, Finn and Coraline Bushon; siblings, Sally Johnson of Mt. Pleasant, Mary Kerns (Twin Sister) of Mt. Pleasant, Pat Paisley of Midland, Michigan, Brother in law Don Brocieus of Vermontville and Sisters in law Susan (Brocieus) Bates of Lansing, Roxanne (Stein) Paisley of Gladwin, Mary (Peltier) Paisley of Florida and several nieces and nephews. A special mention to niece Jessica (Brocieus) Stroub who lived with the Paisley Family for many years in the Lansing area. Chuck was preceded in death by his siblings Joseph Paisley, Jean Bundy, William (Bill) Paisley, Perry Paisley and Brothers in law Bob Kerns, Larry Johnson, Ben Bundy and Doug Palmer. Sister in law Carol Palmer. In following Chuck's wishes, a cremation has taken place and a memorial service will be planned at a later date in 2021 in Mt. Pleasant, MI. In lieu of flowers, memorial contributions may be made to the American Diabetes Association

Charles (Larry) or (Chuck) Paisley of Mt. Pleasant, MI passed away Saturday December 19, 2020 in Plant City, Florida at the age of 76, after battling a long illness. Born in Mt. Pleasant on February 2, 1944 to the late Charles and Margaret... View Obituary & Service Information

The family of Mr. Charles "Larry" "Chuck" Paisley created this Life Tributes page to make it easy to share your memories.

Send flowers to the Paisley family.