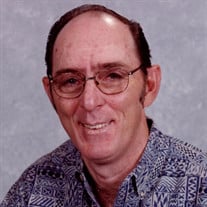 It is with deep sorrow and much love that we announce the passing of Clarence Mercel Hickey on March 14th, 2021. Clarence was born on September 16th, 1947 in Tampa Florida to Marigold & Mercel Hickey. He was an accomplished Heavy Equipment Operator. Working for the Union Local 925, he was highly sought after because he could run anything that ran. He could also fix it. He taught himself to fix just about anything that needed fixing, whether at work, at home, or for his friends and neighbors. Clarence ended his working career at Wheelabrator McKay Bay, where he was a crane operator. He retired in 2014. When asked what he was going to do in retirement, he said, “Fish and spend time with my Grandchildren.” That’s exactly what he did. Clarence married the love of his life, Patricia Ann Cook on April 19, 1965. They were happily married and almost inseparable for 55 years 11 months. Clarence and Patricia raised three children, Lori Hickey-Wynns, Kelli Bailey, and James Hickey. His four beloved Grandchildren, Lauren, Wyatt, Caroline, and Tristan, as well as his two Great Grandchildren, Kasyn and Harbor, are his proudest, most treasured legacy. Clarence was preceded in death by his Father Mercel Clarence Hickey, Mother Marigold Hall, his brothers, Dick Key, Bo Hickey, and Gene Hall, and his faithful companion Goldendoodle, JuneBugg. He is survived by his wife Patricia, three children, Lori, Kelli and James as well as his Sisters Jewel Overstreet and Carolyn Flack. Clarence’ passions included his Family, Fishing and JuneBugg. He was an animal lover his entire life but nothing could compare to the love he had for his dog. He loved to fish in fresh and saltwater. He could find the bright spot in anything, and could make you forget your troubles with his stories, riddles, and jokes. There has never been a more devoted man to his family, faith, and friends. He led by example and taught his family the meaning of hard work and nothing in life is going to be free. He taught them to be strong; to rise above challenges, to be responsible, to stand up to bullies, to protect the vulnerable, to live honestly, to reverse course when you’re wrong, to never back down when you’re right, to let your actions, not words, determine who you are. The love he poured into his children and grandchildren will be life lessons they will never forget. A celebration of Clarence’s life will be held on Saturday, March 20 at 3:00 P.M. at Hopewell Funeral Home, 6005 South County Road 39, Plant City, where the family will receive friends beginning at 2:00 P.M. Graveside committal to follow at Alderman-Pelote Cemetery, Lithia. For those unable to attend, the service will be live-streamed at Facebook.com/HopewellFuneral. Expressions of condolence at HopewellFuneral.com.

It is with deep sorrow and much love that we announce the passing of Clarence Mercel Hickey on March 14th, 2021. Clarence was born on September 16th, 1947 in Tampa Florida to Marigold & Mercel Hickey. He was an accomplished Heavy Equipment Operator.... View Obituary & Service Information

The family of Mr. Clarence Mercel Hickey created this Life Tributes page to make it easy to share your memories.

It is with deep sorrow and much love that we announce the passing...

Send flowers to the Hickey family.