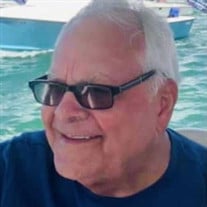 HAYS, JAMES WOODSEN, 83 of Plant City, FL, passed away on Tuesday, January 12, 2021. James (Jim) was born in St. Petersburg, FL on April 23, 1937, the son of William Lawrence Hays and Victoria Elkins Hays. Jim was a man of perseverance, wit and personality. Jim will always be remembered as being handsome with an incredible sense of humor. His natural intelligence and curiosity led him to overcome poverty and become an entrepreneurial man pursuing many businesses over a life time. Also, Jim had a voracious love of reading, writing, politics and sports. And, his love never wavered from God, Family and Country. Jim graduated from St. Petersburg High School in 1955, received a football scholarship to Hinds Junior College in Raymond, Mississippi, transferred to Millsaps College the second semester of his freshmen year and wound up graduating from the University of Florida with an Industrial Engineering Degree in 1961. Jim was the first person in his family to receive a college degree in which he went on to get his Masters in Business Administration and Accounting from the University of South Florida. Jim was an alumnus of Kappa Sigma Fraternity and served as President while he attended UF. After Jim graduated from the University of Florida, his first job was with IBM for seven years. Next, he went on to form his own computer service company which was called Professional Computer Management (PCM). Most of PCM’s clients were CPA’s. Upon selling PCM, Jim became a consultant for a chain of convenience stores based in Orlando. They asked him to join them as the CFO, and he wound up owning some gasoline stations in Polk County. Once Jim dissolved his last site, he decided to be a full time CPA/CFP and started his own business in August 2012: Hays and Associates LLC in Plant City. Jim was reveredby his staff and clients. He often talked of how fond he was of them all and considered them some of his best friends. Jim was a renaissance man. He often stated that he could never imagine NOT working. Jim was active in his community; he was a member of Kiwanis, Elks Club and served as President of the Greater Davenport Chamber of Commerce. He was an avid sports fan of the Florida Gators, Buccaneers, Lightning and Rays. Jim is survived by his wife of 45 years, Cheryl Hays, mother of his children Coralee Hays, children Tracey Hays Sullivan (Bob), Terry Hays Blackard (Alan), Steven Hays (Katherine), Julie Hays, Darren Smith, Deanna Smith Padgett (Nick), and beloved grand children Scott, Jessica, Nicholaus, Morgan, Aden, Theo, Ainsley. A Celebration of Life Service will be held at Hopewell Funeral Home 6005 S County Road 39, Plant City, FL 33567 starting at 2pm on Saturday, January 30, 2021. For those unable to attend, the service will be livestreamed at facebook.com/HopewellFuneral. Jim’s Celebration of Life will continue after the end of the Service at the Florida Rustic Barn 1201 Swilley Road, Plant City. In lieu of flowers, please donate to the American Heart Association in honor of James W. Hays. Jim/Dad/Gramps will be deeply missed by ALL.

The family of Mr. James Woodsen Hays created this Life Tributes page to make it easy to share your memories.

Send flowers to the Hays family.