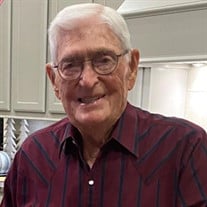 James Otis Norris was born in Troy, Alabama on October 16, 1920 to Lester and Myrtle Norris and peacefully went to be with his Lord and Savior on Thursday November 11, 2021 at 101 years old. He was preceded in death by his beloved wife, Doris Hinson Norris. Together they enjoyed a long and happy marriage of seventy-five years. James is survived by his daughters, Doris Jean Tuten and husband Eddie, Wanda Ann Allen and husband Frank, his son, Odis L. Norris and wife Susan (†), nine grandchildren and spouses, twenty great- grandchildren, and five great-great-grandchildren. He will be laid to rest at a graveside service on Thursday, November 18th at 10 a.m. at Pleasant Grove Cemetery in Durant, Florida. James was a Veteran of WWII, proudly serving in the U. S. Army as a MP. James worked as a farmer for many years and then as a painter and carpenter for Mobil Chemical Company until he retired in 1982. For several years after, he continued to use his skills on many projects for friends and family members. He also maintained a one-acre garden that produced a yearly bounty of vegetables for his large family. In the later years of his life, James tackled several large projects, including the restoration of a 1950s Farmall 100 tractor and a bass fishing boat. He was always willing to help friends and family members with their own projects. He had a great mind for building and repairing things, and often would amaze people by how quickly he could solve a problem. James lived most of his life in Keysville, Florida and was a member of Belle Shoals Baptist Church in Brandon. He spent his remaining years in Spring, Texas and attended Champion Forest Baptist Church. James leaves behind a legacy of service and love that will live forever in the memories of everyone who knew him. He was a devoted husband, father, and friend who will be dearly missed. In lieu of flowers, the family asks for donations to The Gideons International (sendtheword.org).

James Otis Norris was born in Troy, Alabama on October 16, 1920 to Lester and Myrtle Norris and peacefully went to be with his Lord and Savior on Thursday November 11, 2021 at 101 years old. He was preceded in death by his beloved wife, Doris... View Obituary & Service Information

The family of Mr. James Otis Norris created this Life Tributes page to make it easy to share your memories.

Send flowers to the Norris family.