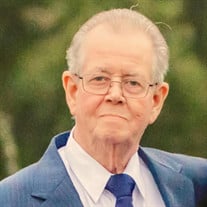 John Crawford Shupard, 76, of Plant City, born in Lancaster, Pennsylvania on February 14, 1945, entered into eternal rest on March 16, 2021. He and his family moved to Plant City early in his childhood, and in 1970, at the age of 25, he bought Crescent Jewelers and successfully ran the business until his passing. He was a quiet gentleman to those whom he met and quite jovial to those that came to know him. He was a Mason, Shriner, and Elks Club member his entire adult life. He was well known in the Plant City community and a respected Jeweler amongst his competitors, often lending and hand or knowledge to those who were in need. He enjoyed spending time with his friends, classmates, and family and was very active sponsor for many activities amongst his small town. The biggest legacy he leaves behind is his five grandchildren that he adored. He was preceded in death by first wife, Brenda Hobbs Shupard; and parents, John T. and Leonora Shupard. He is survived by his daughters, Kelli Cummings (Frank), Robyn Hyde (Eddie); son, John Thomas Shupard (Cassidy); grandchildren, Breana Huffman, Noah Huffman, Macey Hyde, Ande Grayce Shupard, and new grandson expected in August; brother, Randy Shupard; and second wife, Marjorie Van Cise. The family would like to extend a huge thank you to Robyn & Eddie Hyde, Toni Christie, Charlie Lavender, Laura Derryberry, and Cheryl Nelson for taking such great care of John in his final years. A funeral service will be held Friday, March 26 at 7:00 P.M. at Hopewell Funeral Home, 6005 South County Road 39, Plant City, where the family will receive friends beginning at 6:00 P.M. For those unable to attend, the service will be live-streamed at Facebook.com/HopewellFuneral. In lieu of flowers, memorial contributions may be made to Shriners Hospital for Children - Florida at www.shrinershospitalsforchildren.org/tampa. Expressions of condolence at HopewellFuneral.com.

John Crawford Shupard, 76, of Plant City, born in Lancaster, Pennsylvania on February 14, 1945, entered into eternal rest on March 16, 2021. He and his family moved to Plant City early in his childhood, and in 1970, at the age of 25, he bought... View Obituary & Service Information

The family of Mr. John Crawford Shupard created this Life Tributes page to make it easy to share your memories.

Send flowers to the Shupard family.