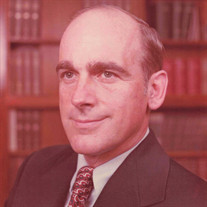 John Victor Verner, Jr. was born on April 26, 1927, in Greenville, S.C. to John, Sr. and Ruth Groce Verner. After graduation from High School, he enlisted on his 17th birthday in the Army Specialized Training Reserve Program, during which he... View Obituary & Service Information

The family of Dr. John Victor Verner Jr. created this Life Tributes page to make it easy to share your memories.

Send flowers to the Verner family.