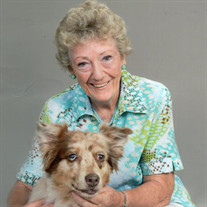 Muriel Lisbeth Cairnie (Ross) Cook, 80, of Plant City, Florida, died in a car accident on November 4, 2021. Muriel was born in Boston on July 15, 1941. She grew up in Quincy, Massachusetts, before moving to the UK with her family in her teen years. It was there that Muriel met her future husband, Ian, an engineer who was working on the Cruachan hydroelectric power station. She was sufficiently impressed, and they married at the Cathedral in Oban, Scotland, on April 2, 1964. They lived in Lincolnshire, UK, until the early 1990’s, after which they moved back to the US, and settled in Plant City. Muriel was a talented artist, most certainly inheriting her artistic genes from her Scottish relatives. She dedicated herself to her watercolor paintings, her needlework, cross-stitch, knitting, and crocheting, creating beauty with much precision. She graciously shared her love of crafts and her creations with friends and family. Muriel was a member of the Art Guild in Plant City, serving as treasurer, and she worked at the local Strawberry Festival for many years. She was also a member of St. Peter’s Episcopal Church. Muriel was fascinated by genealogy, and she dedicated herself to researching her Scottish roots. Her efforts were rewarded when she received a letter from a very elderly John McCorquodale, from Lismore, who helped her piece together the puzzle of her ancestry. Over the years Muriel became close with many cousins, aunts, and uncles whose parents had come to Boston from Scotland in the early 1900’s, with many family members eventually settling in Ohio and Wisconsin. The Cairnies from Edinburgh, Scotland, truly represented the American dream—working class people, applying their skills and work ethic, to become successful. More recently, Muriel was excited to discover she had relatives on her father’s side in Louisiana and enjoyed visiting and getting to know them. Muriel displayed a clever wit and had a wicked sense of humor. She was a keen observer of people and of life. She knew how to make those around her feel at ease and engage. She had a kind heart and generous spirit. Throughout her life, Muriel was devoted to animals. May the story of the ‘Rainbow Bridge’ be true, so that Muriel will be reunited with her much loved and adored doggies, specifically, Bobbie, Binkie, Scooter, Tammy, Peachy, Laci, and Rosie. She was preceded in death by her husband, Ian Cook. She is survived by extended family in Colorado, Ohio, Wisconsin, New Hampshire, Massachusetts, Vermont, South Carolina, Louisiana, and the United Kingdom. Muriel’s wishes were to be cremated, with her remains to be interred at the Wollaston Cemetery in Quincy, Massachusetts, alongside her husband’s. A memorial service will be held Tuesday, November 30, from 5:30-7.00 PM at the Project Access Resource Center at Walden Lake Apartments, 1400 Plantation Blvd in Plant City, Florida. Donations in honor of Muriel can be made to one of her favorite charities: Best Friends Animal Society, Inc, 5001 Angel Canyon Road, Kanab, UT 84741; The Retirement Home for Horses, Inc., 20307 NW CR 235A, Alachua, FL 32615; Critter Adoption and Rescue Effort, Inc., 1528 27th Street SE, Ruskin, FL 33570. Expressions of condolence at HopewellFuneral.com As Antoine de Saint-Exupery wrote in The Little Prince, "In one of the stars I shall be living. In one of them I shall be laughing. And so it will be as if all the stars were laughing when you look at the sky at night."

Muriel Lisbeth Cairnie (Ross) Cook, 80, of Plant City, Florida, died in a car accident on November 4, 2021. Muriel was born in Boston on July 15, 1941. She grew up in Quincy, Massachusetts, before moving to the UK with her family in her teen... View Obituary & Service Information

The family of Mrs. Muriel Lisbeth Cairnie (Ross) Cook created this Life Tributes page to make it easy to share your memories.

Send flowers to the Cook family.