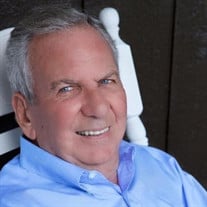 Owen Van DeShong, of Dover, Florida, was born on August 30, 1937, and passed away on October 16, 2021, at 84 years of age. He attended Turkey Creek High School and eventually graduated from Cork night school in the class of 1955. Owen was drafted into the US Army service from 1960-1962. He attended boot camp in Fort Riley, Kansas and was married in 1961 before being deployed to South Korea. Owen returned home and continued to work as a welder, layout man, and fabricator. He worked at Florida Steel, Plant City Steel, Westinghouse Nuclear Power Plant, C&S Maintenance, and retired from IMC mines. Owen was meticulous in his work and an extremely hard worker. Owen loved being outside. One of his favorite pastimes was flying airplanes. He trained and achieved several pilot ratings including Solo, Private, Multi-Engine, Commercial, and instrument rating. He even enjoyed solo skydiving several times in Zephyrhills. Owen had many friends and became more social in his later years. He regularly had breakfast with a group of men. His gentle manner and sweet spirit made him loved by so many. Some friends from his early youth remain friends to this very day. Owen’s passion was his family. He was so proud of each one of them and gave thanks to God every day for the blessing of having such wonderful children, grandchildren, great-grandchildren, and in-laws. Owen is survived by his wife of 60 years, Margaret DeShong, his son Keith DeShong (Rhonda) of Plant City, his daughter Kimberly DeShong of Tampa, 3 granddaughters – DeAnna Stephany (Justin), Marci Poppell (Daniel), and Mya DeShong, and 3 great grandchildren – Presley Stephany, Boone Stephany, and Dani Lynn Poppell, and his older brother Carl DeShong (Olga). Owen was loved by so many and will be greatly missed. A funeral service will be held Saturday, October 23 at 11:00 A.M. at Hopewell Funeral Home, 6005 South County Road 39, Plant City, where the family will receive friends beginning at 10:00 A.M. Graveside committal to follow at Hopewell Memorial Gardens. Expressions of condolence at HopewellFuneral.com.

Owen Van DeShong, of Dover, Florida, was born on August 30, 1937, and passed away on October 16, 2021, at 84 years of age. He attended Turkey Creek High School and eventually graduated from Cork night school in the class of 1955. Owen was drafted... View Obituary & Service Information

The family of Mr. Owen Van DeShong created this Life Tributes page to make it easy to share your memories.

Send flowers to the DeShong family.