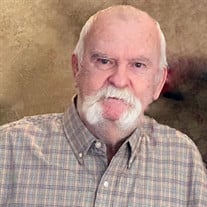 Samuel “Sam" Mills Morrow, 71, passed away November 10, 2020 at Lakeland Regional Medical Center. He was born in Plant City, Florida on April 11, 1949. He grew up in Plant City, graduated from Turkey Creek High School in 1967, served in the Marine Corps, and currently resided in Lakeland. Sam worked for the Polk County Road Dept. for thirty years as a Paving Inspector. He was a Christian first and foremost and a Baptist by choice. His favorite pastime was stock car racing. He literally lived and breathed the races, sprint cars in particular. Sam never met a stranger, especially at the races, where he was notorious for being a practical joker. He was a regular fixture at all the racetracks in Central Florida. When he wasn’t racing or working on a pit crew, he was announcing races. When Sam was calling a race he was exceptional at getting the crowd fired up and into the action. Sam loved restoring and racing antique race cars, and this past year was awarded a trophy for his years of service by the Daytona Antique Auto Racing Association (DAARA). He will be dearly missed by family, friends, and countless racing fans and associates. He is predeceased by his mother Bernice Morrow, father Arthur Morrow, and sister Juanita Henderson. He is survived by his brother Bill Morrow (Diane), nephew Ron Henderson (Debbie), niece Connie Harris (Victor), niece Tonya Lawson (Eric), and nephew Chad Morrow (Kellie). Also survived by many cousins, great nieces and nephews. In lieu of flowers please make a donation to your favorite charity in memory of Sam. A funeral service will be held on Tuesday, November 17 at 11:00 A.M. at Hopewell Funeral Home, 6005 South County Road 39, Plant City, where the family will receive friends beginning at 10:00 A.M. For those unable to attend, the service will be live-streamed at Facebook.com/HopewellFuneral. Graveside committal to follow at Hopewell Memorial Gardens, Plant City. Expressions of condolence at HopewellFuneral.com.

The family of Mr. Samuel Mills Morrow created this Life Tributes page to make it easy to share your memories.

Send flowers to the Morrow family.