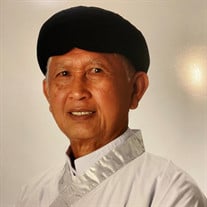 Thanh Thien Le, 77, of Plant City, Florida, born on October 17, 1943 in Dong Thap, Vietnam, entered into eternal rest on November 13, 2020. He enjoyed a long career in the Citrus industry, and continued to farm and garden into retirement. He... View Obituary & Service Information

The family of Mr. Thanh Thien Le created this Life Tributes page to make it easy to share your memories.

Send flowers to the Le family.