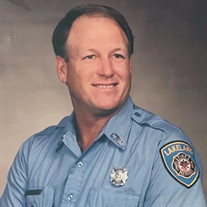 Thomas Edwin Brown, 68, born in Crawfordsville, Indiana, passed away peacefully at home on May 1, 2021. Tom lived the majority of his life as a resident of Tampa, Lakeland, and Plant City, Florida. He was a proud Eagle Scout and graduate of Plant High School in 1971. Tom’s father Edwin Leon Brown, served in the Army Air Force and was a POW in WWII. When he returned from overseas, Tom took an interest in caretaking as he looked after his ill father. This led Tom to a career as a firefighter where he was a driver engineer EMT until retiring after 25 years of service with the Lakeland Fire Department. Tom was the son of Edwin and Pauline Brown. He was preceded in death by his brother Kent and his sister Erolyn (Rone). Tom is survived by his precious wife of 47 years Robin (Edwards), son Curtis, daughter Kerry (Mullis), son-in-law James Mullis, siblings Caryl (Thompson) and Susan Brown. He leaves behind two beautiful granddaughters Kamryn and Jillian Mullis. He was a long-time member of FBC of Lakeland, and more recently FBC of Plant City. Tom was an avid golfer, fisherman, and member of several church choral groups. Known for his good natured humor and willingness to help those in need - he was a very loving father, friend, and mentor for those that were fortunate enough to have him in their lives. A funeral service will be held Wednesday, May 5 at 11:00 A.M. at First Baptist Church Plant City, 3309 James L Redman Parkway, Plant City, where the family will receive friends beginning at 10:00 A.M. A graveside committal will be held at 3:00 P.M at Garden of Memories, 4207 E Lake Avenue, Tampa. For those unable to attend, the service will be live streamed at www.fbcpc.com/live. Expressions of condolence at HopewellFuneral.com.

Thomas Edwin Brown, 68, born in Crawfordsville, Indiana, passed away peacefully at home on May 1, 2021. Tom lived the majority of his life as a resident of Tampa, Lakeland, and Plant City, Florida. He was a proud Eagle Scout and graduate of... View Obituary & Service Information

The family of Mr. Thomas Edwin Brown created this Life Tributes page to make it easy to share your memories.

Send flowers to the Brown family.